The Chronicle of Jesus… 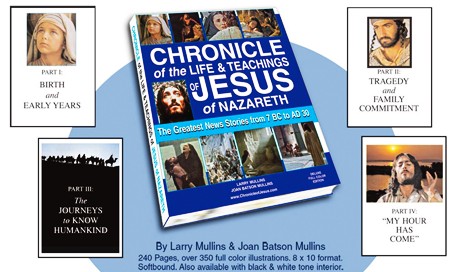 A Journey of Love

By Larry and Joan Mullins

About 22 years ago, we began a journey together, creating a book: “Chronicle of the Life and Teachings of Jesus … The Greatest News Stories, 7 BC to AD 30.”  We wanted a means to teach younger Urantians about Jesus with “real time” news stories that were seemingly reported almost day by day. The idea evolved from a few pages passed out every week in our youth study group to the publication of a completely revised, 240 page, full color adult book with over 350 illustrations.

This project was set into motion just after our marriage. When the first draft was complete, there were obstacles to publishing that seemed insurmountable. The Urantia Book was still in copyright, so extensive direct quotes were out of the question. Production costs for such a full color publication in those days were impossibly high.  We wanted to use the photographs from the wonderful 1977 movie, “Jesus of Nazareth,” directed by Franco Zeffirelli, but we were advised that the rights to these would be a nightmare in effort and cost to obtain. Years passed, and we continued to use early versions of the Chronicle for teaching young people about Jesus (including our daughter, Michelle, and Angie, Jesse, and Haley Thurston).

Meanwhile, revolutionary changes in technology made it increasingly possible to actually produce and publish a full color book for a reasonable cost. After extensive editing, we searched for the owners of the rights to the Zeffirelli film’s photographs and eventually found them, striking a deal two years later. The arduous graphic production process began, as well as undertaking several rewrites to incorporate more and more of the original text of The Urantia Book. We are grateful to all of the good Urantian friends who helped us throughout the long and challenging journey to make the “Chronicle of the Life and Teachings of Jesus of Nazareth” a reality. Our hope is that a new generation of believers will be inspired to follow the Master’s example of love and service. 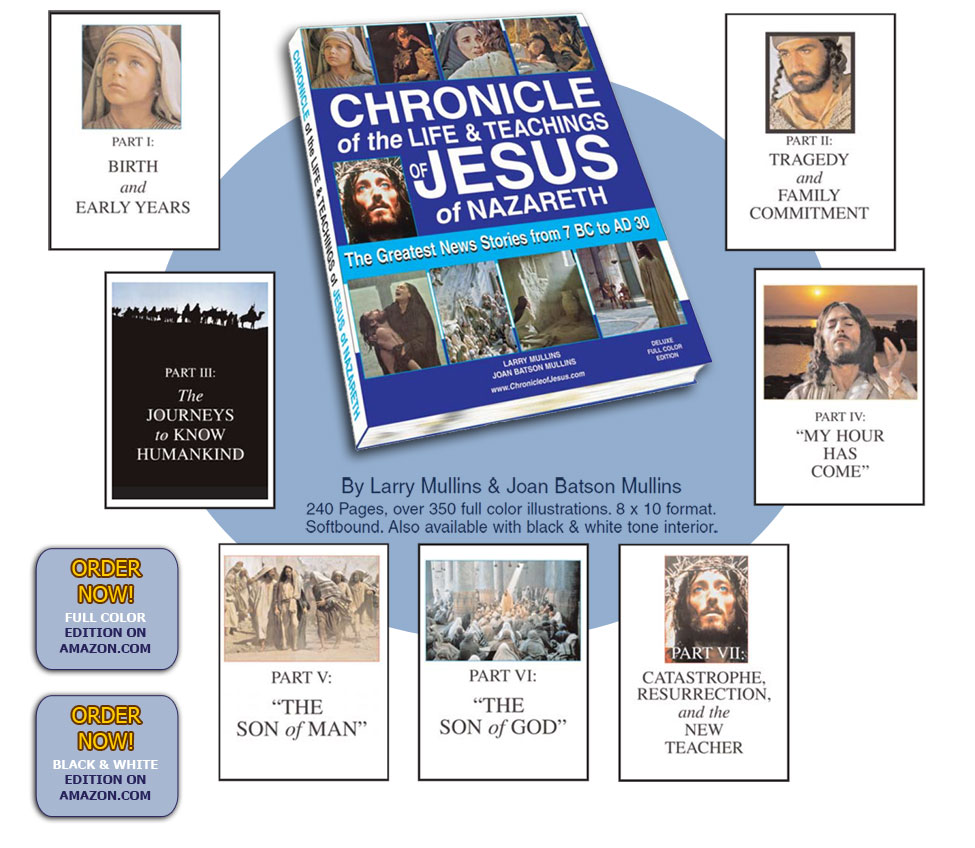 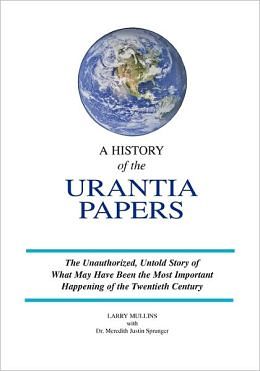 From the Admin: Larry Mullins with Dr. Meredith Justin Sprunger (one of my heros) also wrote and published the most comprehesive and well informed books about the Urantia Papers,

A History of the Urantia Papers

From the Foreward to the Second Edition: Nearly ten years have passed since we published A History of the Urantia Papers. Since then, two key events have taken place regarding the Urantia Papers. First, the Papers themselves are now in the public domain after a successful lawsuit. Second, The Sherman Diaries have been published, providing a great deal of additional information about the early culture of the Urantia movement, and the principle players involved in its publication.

However, our interest in publishing the History was never to attempt a chronicle of the Urantia movement. Our concern was always the Papers themselves. It was in this spirit that Meredith Sprunger, myself, and fourteen longtime readers contributed, edited, and signed off on our original History. We meticulously documented and indexed the material we presented. Our primary source of evidence was the book itself, and its various printings. Next we relied upon documentation from the Urantia Foundation and its supporters. Third, we studied various documents from Urantia Brotherhood, and letters, books, and other materials gathered from various individuals, some of whom were hostile to our history project. To date, predictable grumbles have been heard by those who disagree with our findings, but no documentation we have presented has ever been challenged. We were not encumbered by any authorization or sanctioning by an “official” Urantian organization. We followed the truth wherever it led …

When our History was written, only two documents were available regarding the socalled “Sherman tempest.” One was written by Harold Sherman himself, and the other was a rebuttal written by Clyde Bedell. Both documents were written nearly 35 years after the fact. With the publication of five volumes of The Sherman Diaries it became obvious that both of these previous accounts were inaccurate. The Diaries were written in real time by Harold and Martha Sherman, and cast a very different light on what took place. The Diaries also dispel many illusions about the culture of the Forum itself. I have elected to leave the account of the “Sherman tempest” in chapter seven as I wrote it originally, and provide the revised account (based on The Diaries) as a supplement inserted after the index in this second edition. This new account is important because over the years Harold Sherman came to believe that Dr. Sadler altered the original Papers before their publication. He had no difficulty believing the Urantia Papers are a significant revelation, but he became convinced that Dr. Sadler had contaminated them with his own ideas. This issue obviously needs to be addressed, and I have done so in the back section of this new edition of our History.

Our new edition also contains important material from a 2007 book published by Cambridge University Press of the United Kingdom. The Invention of Sacred Tradition is an anthology that includes a serious study of the origin and nature of The Urantia Book. The author of the chapter titled: The peculiar sleep; receiving the Urantia Book, is Sarah Lewis. Professor Lewis drew freely from our History (as well as a dozen other sources) for her commentary. In the section on authorship, she refers to a statistical analysis study by Ken Glasziou. This analysis concluded that a minimum of nine authors were involved with authoring The Urantia Book. Glasziou applied his analysis to Dr. Sadler’s numerous books, and determined that Sadler was not one of the authors of the Urantia Papers. Pertinent findings in her study are included as Supplement 2 in this edition of the History, inserted after the new material on the “Sherman Tempest.”

Finally, Supplement 3 tells the story of Center for Urantia Book Synergy, or ‘CUBS,’ and the important contributions it made in the struggle to free the Revelation during the turbulence and strife of the 1980s and early 1990s. The CUBS litigation was the first of the final three Foundation-initiated lawsuits that eventuated in the loss of its copyright and the release of the Revelation into the public domain.

New copies of our original History are hard to find, and at this writing are selling for well over a hundred dollars on Amazon. This paperback edition will be welcomed by dedicated students of The Urantia Book who may have failed to obtain a copy of the original History. A handful of typos have been corrected, and the new edition contains all the material in the first edition, plus the updates explained above.

2 thoughts on “The Chronicle of Jesus…”