Experiences at the Parliament 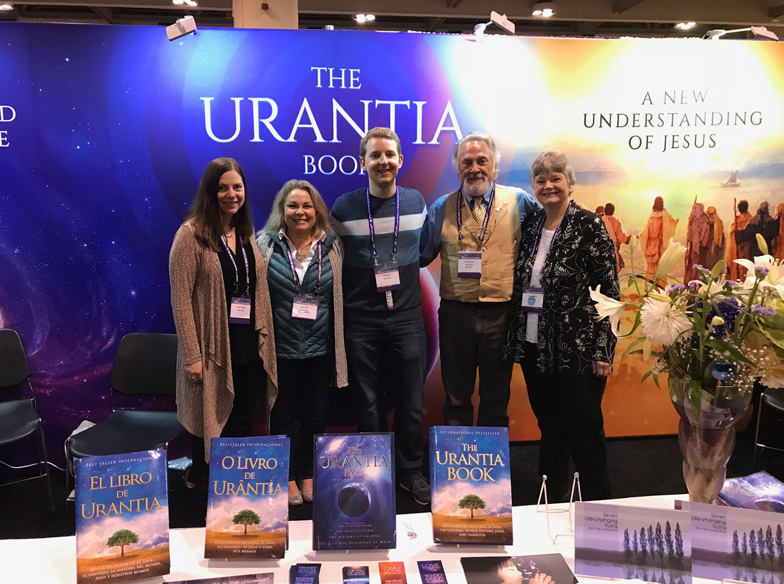 I am still basking in the glow of the Parliament of the World’s Religions. I had the dual privilege of working the Urantia booth and the speaker ready room.   I also had the privilege of being a part of Cristina’s prep committee. It is wonderful to see so much effort bring so much success.

The work done jointly between the people of the Foundation and the Fellowship was a joy to witness. The complete lack of competition and the wonderful attitude of cooperation resulted in a harmony of happiness. Someone said we were the smiliest people at the parliament.

The thing that made the parliament great for me was my ability to listen. The precursor work experienced on the UUI course made listening a joy and gave us the base from which to learn more about the other religions.

I did the vast majority of my talking about the Urantia Book only when asked and then it always was well received. If I talked about the Urantia Book too soon in a relationship or to people who were not curious, they were disinterested but this was not so with most of the amazing people attending or presenting at the parliament. There seemed to be an air of commonality and searching that we all shared and the sense that whomever we met, we were supposed to meet. I always had the sense that they had something specific to share that I needed to hear (and vise versa). The angels were working overtime.

There were countless presentations by brilliant and brilliantly spiritual people and as a parliament volunteer I not only got to meet many of them, I couldn’t walk far before being engaged in conversation that would start with a need for information and end in a shared love.

Whenever the opportunity arose I would ask what they felt was the common denominator of the attendees. I got a variety of answers; love, hunger, yearning, creator, curiosity, breath and death, value, change and from Gandi’s grandson (whom I had the privilege of spend 20 minutes chatting one on one with) ….. fear. He felt that fear was currently a stronger motivator than love and spoke of how it had motivated the world’s religions for thousands of years.

There was a sense of consciousness sharing. There was a sense of connectedness. There was a sense of commonality. There was a sense, a foretaste, of things to come. I felt that these were the people that would be instrumental in leading the world to light and life. Even if they would not be around to see the next step they were going to be the ones to point the way and they were busy getting those step started or adding spiritual gasoline to those fires that were already started. There are so many good things going on outside the circles that are complimentary to, or would benefit from, Urantia Book insights. We need to find more ways to share the teachings without necessarily sharing the source.

It is one thing to glow in the spiritual luminosity of the angels surrounding these magnificent people, it is another thing to keep the lamp burning when you step back into the cold hard winds of the “real” world. To hang onto that sense of what is truly real and to walk steadily towards that light that makes your candle seem like a fire fly in a thunderstorm but  it is reassuring to remember that those same angels are still hovering, guiding and maneuvering  are still with us.

I look forward to volunteering at the next parliament.