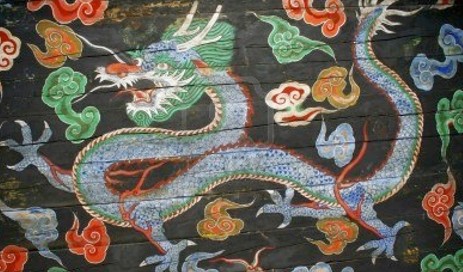 Ever since I got to know the Urantia Book, there has been a never-ending question of doing this – telling people about the book, or not? I always hesitate to talk about the book with people for different reasons, thousands of reasons – Am I ruining the revelation? Am I sort of pushing my belief toward a person I speak to? Didn’t the book say do not try to let the book be known to the world too fast or something like that? … On top of these worrying questions, the reactions I have gotten from people I have tried to introduce the book to have not been very encouraging. But despite all this, there is a very clear yet simple reason why I want to do outreach for dissemination: without someone’s devotion and work, I wouldn’t have been able to know the book!

So here I go – preparing for the Seoul International Book Fair held from June 19 to 23. The SIBF is held annually in COEX, the biggest exhibition center in Korea. The Urantia Book has been introduced at the fair for years. I first visited the Urantia Book booth in 2011, when I met Mr. Buck Weimer and Ms. Dolores Nice from the Urantia Book Fellowship. They introduced me to other readers and I felt more connected than before, when I was feeling like an isolated island. In 2012, I visited the booth again, with delight to reunite with Buck and meet other Urantia Book Fellowship members, Arlene Weimer and Tim Hobbs. Also, I got a little more involved by making posters and doing some translation. My involvement this time was more arbitrary than planned. But they always encouraged me in whatever I was doing, and it really gave me lots of positive energy. I was so afraid (well, still am) of doing and trying things out, but those compliments and encouragement did boost me up.

In 2013, with a little more boldness, I contacted Sy Chang, the manager for the book fair, and told him I wanted to get involved in preparing for booth. Sy allowed me to do it and assured me with his full support. I was so excited about getting involved in dissemination, but the thing was, I had never prepared a book fair! Lots of things and ideas were going on my mind – thinking about a poll where people can vote, a visitors’ book where people can fill their names and contacts, videos that might attract people, etc. To think was easy, to get things done was not. Those ideas seemed never to add up to the real thing. 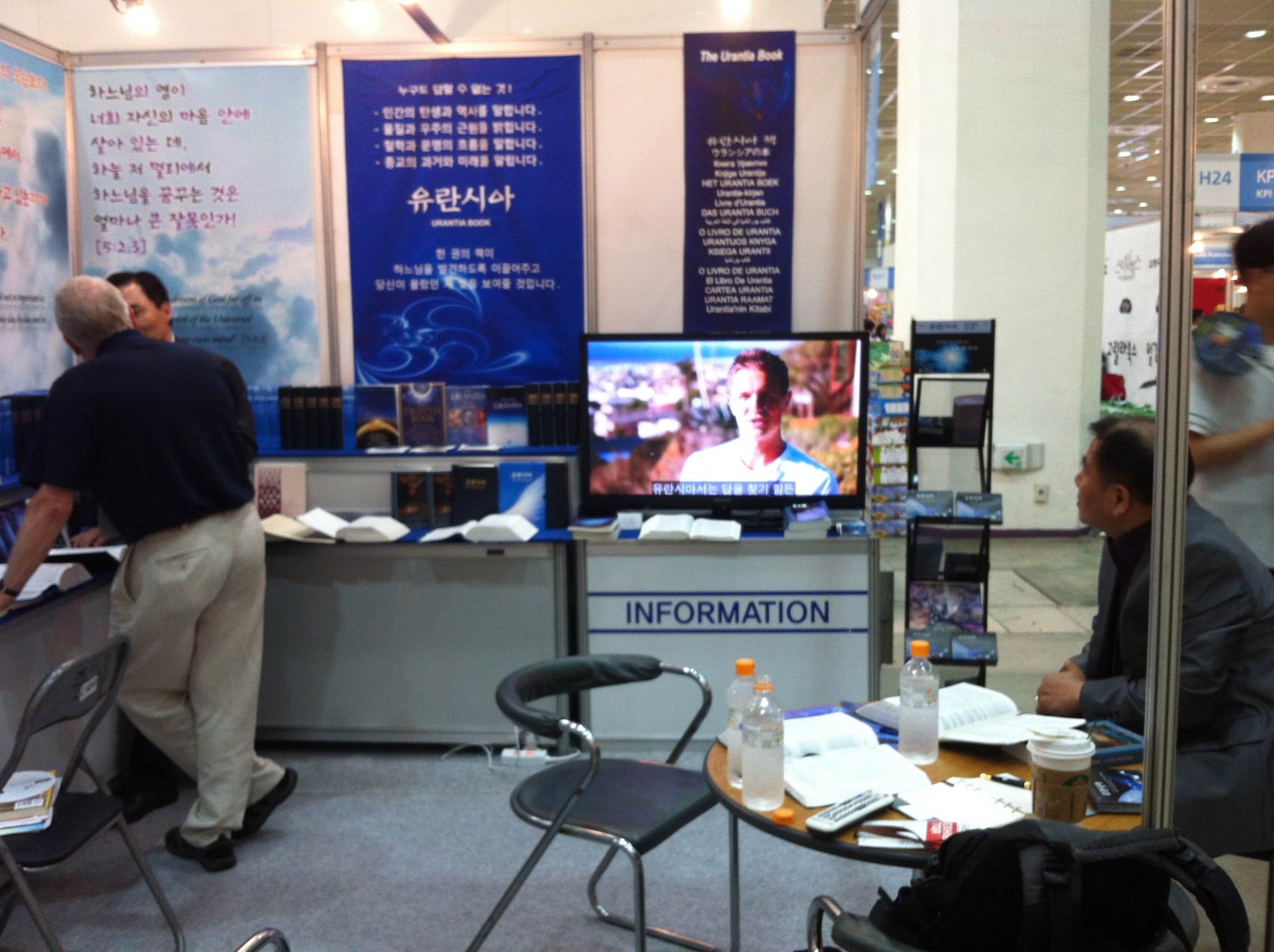 One day, I saw the Introduction to the Urantia Book video made by the YaYA Committee and thought it would be great if I put that in the booth. By the time I was considering this, Barry Clark, who I had been in touch with since I got introduced to him through Dolores, suggested I put his worship video, Worshipful Contemplations On Sameness and Diversity in the booth. THIS IS GREAT, I thought. Richard Jernigan also allowed us to use his video work, A Feast of Uncertainty. Now I had three videos in my hand, waiting to be shown in the booth. With great cooperation from Richard, Teuvo and Barry, the video loop was successfully completed. When the video was put on, it really brought vibrant energy to the booth. One guy who I was talking to, wanted me to explain what the book was about, and I tried to answer but he didn’t like my answers. I didn’t know what to say any more and kept silent. Then he started watching the introduction video and said, “Hey, this video answers my questions!” Hearing him, I was relieved. 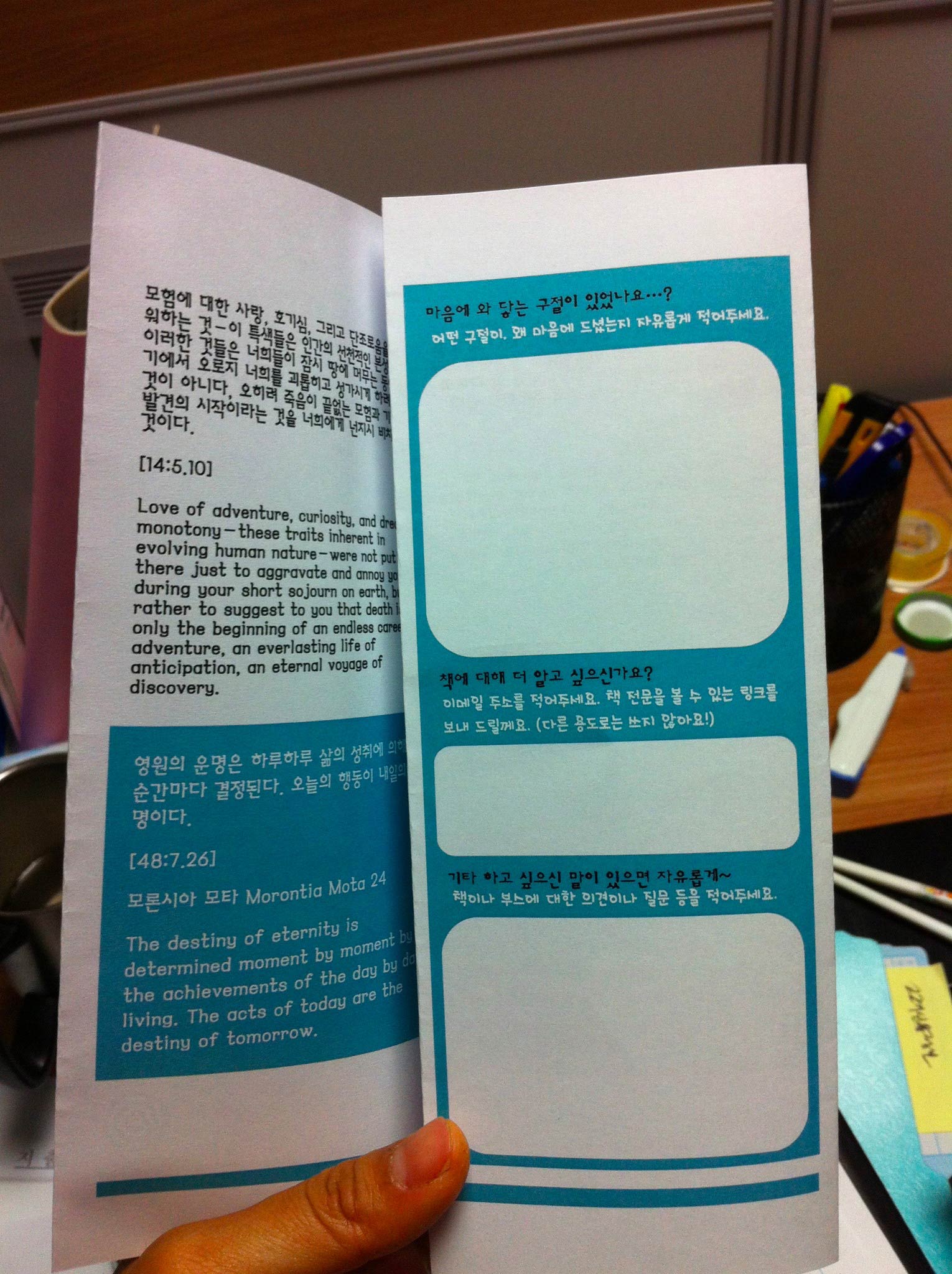 I wanted to make a leaflet through in people could express their first impressions of the book. I put some blanks on one page, where people could put their opinions and their contacts. I asked questions like, “Which phrase do you like the most?” I also said, “If you are interested, please let us know your contact. We will send you the webpage where you can read the whole book.” 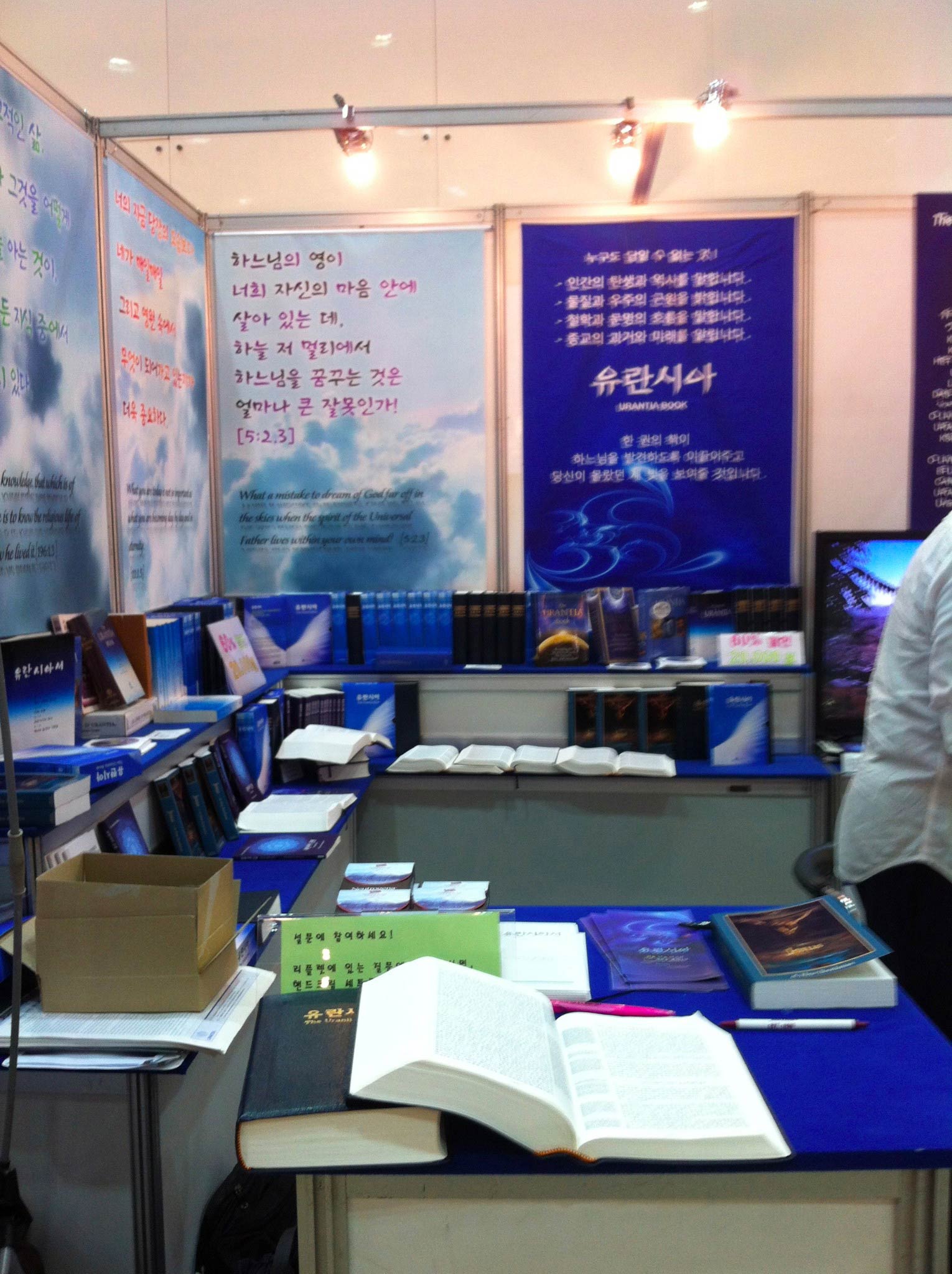 I wanted to make it less blue, less mysterious and less universe. Instead, I wanted to put some phrases from the Urantia Book. I used the image of sky, so it could be mixed well with previous posters. (I gotta tell you that the image of sky is borrowed from the cover of a YaYA report 🙂 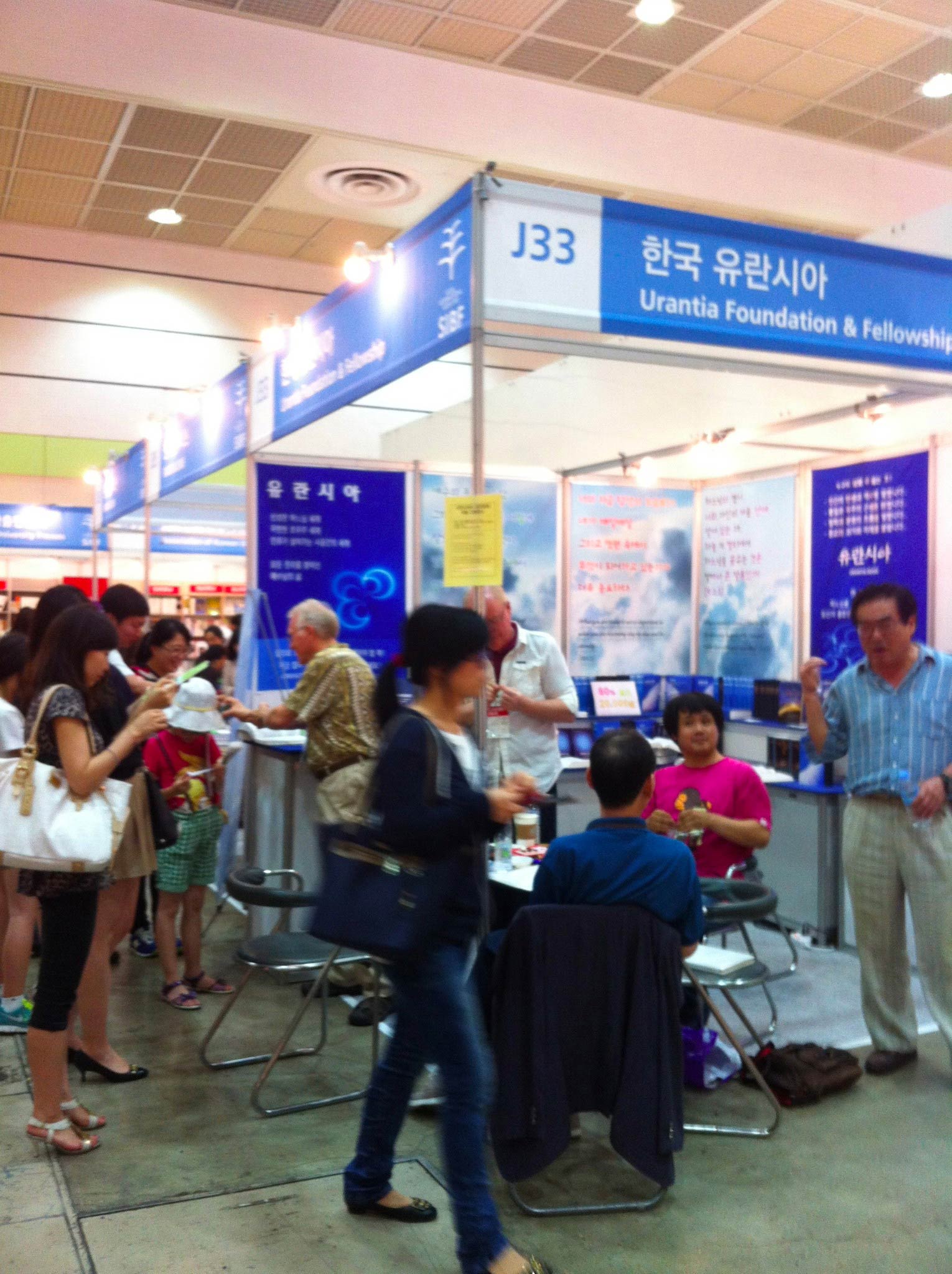 After four days of being in the booth, I realized what really matters is not the leaflet or poster design, but how we treat the visitors. I had prepared what to put in the booth, but hadn’t prepared what to put in my mind. One time, a Christian guy walked in and had a talk with me. He was pretty rigid about his religion and I found no way to continue the conversation. I felt helpless and he left. In the meantime, Buck Weimer, who has been attending the book fair ever since I saw him in 2011, was standing in front of the booth, handing out the “Spiritual Vitamins” with a smile on his face. For some reason, everything he did looked perfect to me. Almost every single person who he had a conversation with took the book of Part IV about Jesus or bought the Urantia Book. Is that because Buck has some sort of magical power? I don’t know. It seemed natural, because he delivered love with his presence.

It was a fun experience, in which I learned so many things that couldn’t be learned from any other source. Being in the booth itself is truly a learning process, in which I can apply the learning from Jesus’ life. 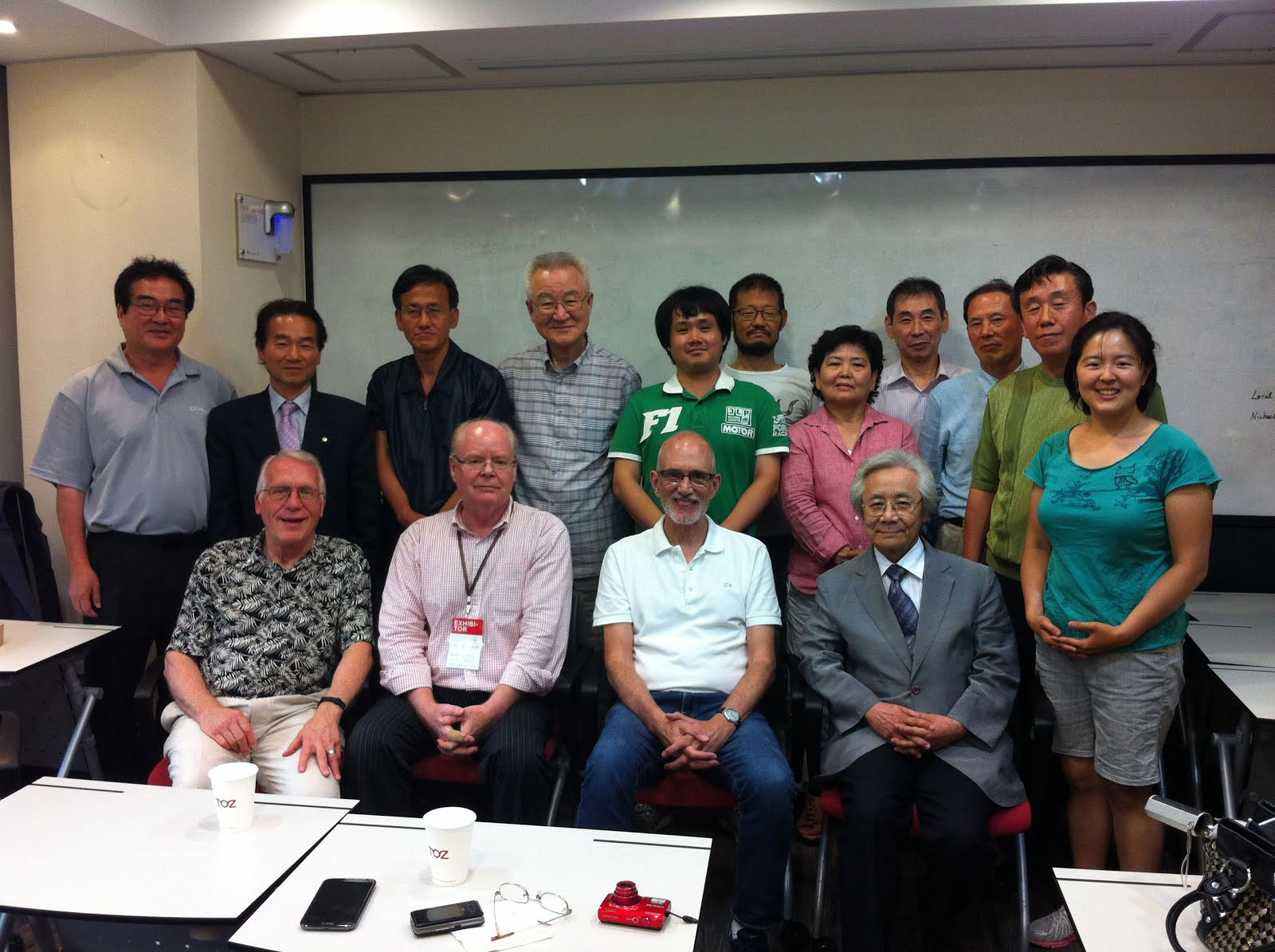