The Graduation of Nelson Mandela 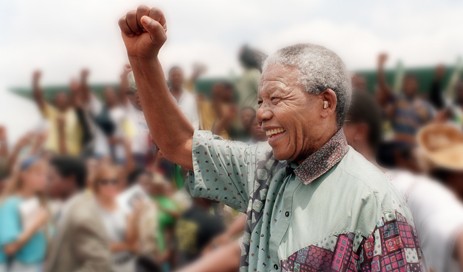 In thinking of what spirituality really means I can’t help but think of deeply good men and women such as Nelson Mandela, Mother Theresa, Arundhati Roy, Benazir Bhutto, Gandhi, Corrie Ten Boom, and Desmond Tutu… to name a few. How did they get to the place where they are the people that to me is synonymous with “spiritual living”?

There are many things that carve out the paths of these powerful and gifted individuals, but the number one similarity that unites them all is that they have all known struggle, pain, adversity, disappointment, persecution, and they have managed to transform the pain they have experienced. Ultimately, they are overcomers. There seems to be a great thirst in them, a probing into the void of the unknown. Of course, they face the common fear that exists when seeking the nameless, the mysterious, the unexplained, the impregnable. It is in this frightening depth that the answers are discovered, and thus begins the dual process of desiring truth and simultaneously abhorring its presence.

Don’t we all freeze up when faced with unbearably hot truth? What these seekers find, though, is that the way may seem unclear and ambiguous at first and the facts hard to bear, but what begins to take place in their minds is a surprise for most. After a time of frenzy in their souls due to stretching the limits of their comfort zones, an inner beacon ignites within them, and they begin to learn of The Way, eventually taking confidant strides in the path of righteousness and goodness. These are the kind of people who cross a certain threshold and whom we admire with much love.

Nelson Mandela happened to be a shining example of having gone to the precipice of pain and choosing to take the plunge into the unknown, knowing that the pain he was experiencing would either destroy him if he accepted only what he knew or, instead, catapult him into new places should he reach a hand out in submission to that which is greater than him.

What seems awkward and uncomfortable to our souls might just be the very thing we need to facilitate expansion. Once we start on the path, our whole life will change forever. And then, just as happened with Nelson Mandela, it will change the course of thousands of others. It is not called “spirituality” like we know today; it is called experiential truth converting into eventual/perpetual Absolute truth, which then can be grasped by the collective mind of humanity.

6 thoughts on “The Graduation of Nelson Mandela”